Electric Vs. Non-Electric Water Softener: Which Is Best Skip to content
As an Amazon Associate We Earn From Qualifying Purchases at no extra cost.

You are not alone. Trust me, it can be very frustrating trying to figure out what type of softener suits your needs. Even worse, choosing which side to take in this contentious debate of electric vs. non-electric water softener.

Both are illustrious, and they all have a bunch of enthusiasts trying to upsell their views but making the right choice involves more than just heeding what individuals have to say. Would you be kind enough to let us help you make a choice?

Read along so you can understand which softener better suits your needs and budget.

The main difference between electric and non-electric water softeners is that the former uses an electric time to control when to regenerate the resin inside the tank. Regeneration is the process of flushing out the positive ions of calcium and magnesium trapped in the resin.

If you are inkling towards the idea of having an electric water softener, maybe you should, first of all, confirm some of these points.

1. You are a very busy person

What is your schedule like? Do you wake up every morning, take a shower, and hit the road as you head to work? Maybe sometimes you get back home late, and all you need is another hot shower and then go into slumber.

If that is your case, you are certainly accustomed to a fast-paced life. Let’s face it, you are busy. You obviously don’t have the luxury of doing simple household tasks, leaving alone manually setting the water softener to regenerate each day.

You definitely need an electric water softener since they have an LCD display, and you can efficiently operate without the burden of wasting time with manual resets.

2. The water from your mains is seriously hard

Your pipes are seriously clogged to the extent of extremely low pressure, and there are white spots all over your bathroom. Should I even mention the cloudy dishes?

Hard water is an unadorned problem, and 9 out of 10 professionals agree that using an electric water softener, especially those that use salt for regeneration, is an excellent choice if you have such an issue. Okay, you may argue that salt-free softeners (mostly non-electric) are no different from salt-based softeners regarding the quality of soft water produced.

But let’s face it, the thing with electric softeners is that they are really effective especially when dealing with extremely hard water. Remember, it is calcium and magnesium that constitute water hardness among other bicarbonates and sulfates. For such, you’ll need an electric water softener.

Check out this electric water softener on Amazon. 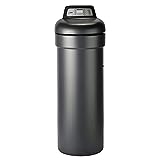 Non-electric water softeners aren’t terrible either. In fact, some people prefer them to their electric counterparts.

But before we dive into conclusions, let’s check some of the pros and cons of non-electric water softeners.

One upside of non-electric water softeners is that they are cheaper compared to electric softeners. If price is something of concern to you, maybe you should overlook some of the downsides and go with these water softeners.

Now, if you are a thrifty person hoping to save a few dollars here and there, a non-electric water softener will be of great benefit.

As a wise consumer, you need to be within your budget and start with saving on electricity costs in one way to go about it. Besides, you will still have the soft water you so much desire.

3. They don’t require a lot of salt for regeneration

During regeneration, brine, a highly concentrated salt, is used to eliminate magnesium and calcium ions from the resin.  Unlike electric water softeners, the non-electric ones use quite a small amount of salt while others use no salt.

Check out these non-electric water softeners: 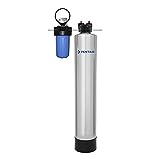 1. It has no programmability

You want to know how your system works and control how it should respond at certain times. Unfortunately, that is not the case with non-electric water softeners. For one, the equipment has no clue when it is a good time to start the regeneration process.

Usually, the process is triggered by how you use your water, such that you could be washing your hands, and the process begins.

That is bearable, but imagine you just got off work and head to take a cold shower. Alas! Reduced water pressure and the most horrible shower ever.

This is one of the biggest downsides of a non-electric water softener. During regeneration, water usually fills the salt tank. Unfortunately, for these softeners, water never stops filling even after regeneration.

The only thing that holds the bridge to a possible disaster is a float inside the tank such that when debris gets to the valve, the tank could overflow, and your entire floor turned into a salty mess.

While you are still trying to figure out the electric vs non-electric water softener dilemma, let me disrupt you a little bit with mechanical vs. digital water softeners.
Hey, don’t get confused.

So what are mechanical water softeners?

Basically, mechanical water softeners are just non-electronic softeners only with a more defined name. As we had mentioned, they don’t need any programming since the system relies only on the volume of water you consume before it can regenerate.

One good thing about mechanical water softeners is that they don’t need a lot of maintenance. For instance, you can go on a vacation and have little to worry about regeneration since no water is being consumed in the household.

Besides, they don’t use too much salt, giving you a chance to save on electricity charges and salt expenses.

What are digital water softeners?

Yes, they are what you would fairly call electric water softeners. Basically, they use electricity, and some have a digital interface for you to program or schedule regeneration. They are the most common and would work well, especially if you have a large family.

With these softeners, you don’t have to worry about when the regeneration will begin as the system automatically starts the process at set hours.

Also, you can input data into the microprocessor, which it uses to estimate just how much water you are likely to have consumed, and then initiate the process at about 70 percent consumption. Isn’t that amazing?

When choosing between the electric and the non-electric water softener, you need to consider several factors. For instance, what is your budget? If you are on a tight budget, maybe you should opt for the non-electric one as it is cheaper.

However, an electric water softener gives you the ultimate control of when regeneration should happen.

Are non-electric water softeners any good?

If you are asking whether they serve their purpose, yes, they do. In fact, more economically. The softeners are cheaper and don’t require any electricity to function. Besides, they will regenerate when you are about to replenish your soft water.

Can you drink water softened?

While soft water is good for household chores and other activities, it might not be the best for drinking. For one, it doesn’t have the essential minerals required in our daily diet, such as magnesium and calcium.

Besides, softened water has high sodium levels; too much of it can cause blood pressure complications.

When you look at the electric vs. non-electric water softeners argument from a broader perspective, you will notice that the latter comes out as a piece of cost-efficient utility equipment.

At the same time, the former portrays a more modern approach to give a wider aspect of total efficiency. A better choice depends on your budget and how hard your water is.

Share on:
Tistas Home is a participant in the Amazon Services LLC Associates Program, an affiliate advertising program designed to provide a means for sites to earn advertising fees by advertising and linking to Amazon.com.”